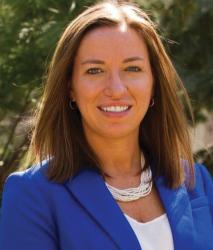 Rachael Brekke spent summers as an adolescent learning about law from one of South Jersey’s most prominent judges, the late Barry M. Weinberg, her zeyde.

“He let me be his sidekick,” explained Brekke, 28, a Voorhees resident who is a rising star in the field of law and, most recently, politics. “He would let me take notes for him and do administrative work at his arbitration and mediation law firm.”

At the beginning of every mediation, she recalled, her grandfather, then retired from the bench, would pass her a note with his prediction about the settlement amount— and he was always right.

With such a hands-on apprenticeship, it’s no wonder that Brekke has had such a clear vision about her future from a young age. Like her grandfather, she believes that the practice of law is an avenue to improve lives and better society. Although she never expected her background would lead her to run for public office while in her 20s, as she did recently as a Republican challenger for Voorhees Township Council, this too—she discovered—was an opportunity to make positive changes. And although she lost in her first bid for office against long-established Democratic incumbents in November, she said the run was a positive experience.

The energy she put into getting to know her Voorhees neighbors and the issues they care about is the energy she pours into all her endeavors, said Brenda Eutsler, president of the Camden County Bar Association.

“It’s not like you have to push Rachael into anything,” said Eutsler, who has gotten to know Brekke through her leadership in the Association’s Young Lawyer’s Division. “She comes as a volunteer with great ideas, lots of energy and inspires everyone around her.”

An American University graduate with a degree in finance, Brekke doubled down at Rutgers University in Camden, pursuing both a law degree and masters of business administration. All the while, Brekke was active in the Jewish Law Student’s Association (she served as president) and with the Bar Association.

Upon graduation, she clerked for Judge Mary Eva Colalillo, then presiding judge in the Camden County Chancery Division. But after spending only a few years in private practice, Brekke in 2013 was presented by Dianne Solomon, commissioner of the New Jersey board of Public Utilities, with the opportunity to become Solomon’s regulatory and policy advisor.

Although it was never her intention to run for public office, her recent exposure to politicians gave her new insight. From Gov. Chris Christie to local players, she saw lawmakers who seemed energetic and genuinely interested in using their power to bring jobs to New Jersey and otherwise improve people’s lives.

Although she is not considering another run in the near future, Brekke said she would never rule any opportunity out.

“I was honored to be trusted by so many people,” she said. “Trust is not something people give to anyone unless it’s earned. I felt that I earned their trust. My grandfather always told me that integrity and your reputation are everything.”